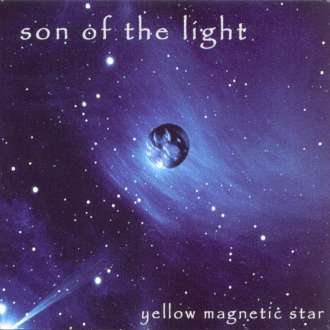 Track 7 written and produced by Titin Moraga and James Asher.

Yellow Magnetic Star – Son of the Light All tracks written and produced by Titin Moraga, except track 7 (Return of Pacal Votan), written and produced by James Asher and Titan Moraga. Yellow Magnetic Star is Titin Moraga. Originally from Sante Cruz in Chili where he worked in dance-theatre and formed a band Pequenco Vicio. In 1992 he moved to London and after 3 years released his first solo album, titled ‘Andean Trance’. The album was warmly received and live performances of the album were played at Kundalini and other venues. In 1998 Chris Decker (Medicine Drum / Return to the Source) heard ‘Andean Trance’ and contacted Titin. The result was Anahata, a project co-produced by both Titin and Chris which released the album ‘Doors to Avalon’, from which the track ‘Contact’ featured on the Whirl-Y-Waves Vol.2 – Global Grooves compilation. In 1999 Titin was contacted by James Asher to remix one of his tracks from his acclaimed ‘Tigers of the Raj‘. The result was an excellent remix of ‘Red Desert’, and featured on the James Asher remix album, ‘Tigers of the Remix‘. Titin then travelled to India and Cambodia, looking for inspiration for his solo project, ‘Son of the Light’. The album was released in December 2000 at Kundalini.