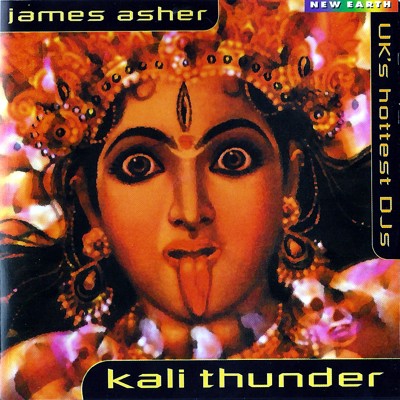 Kali Thunder is the US release of Tigers of the Remix. Apart from the cover art the album is identical to the original UK release.

Following the success of his Aboriginal-African dance album, Feet in the Soil, James Asher was inspired by the sparkle and vibrancy of Rajasthan to create an album celebrating its power and mysterious appeal. In the year spent building this idea, James was able to track down twenty of the finest musicians Indian and Western, who would help craft the uniquely magical impression made by India. The resulting album was Tigers of the Raj, but James was keen to see how others could expand this vision through re-interpretation. He invited pioneers in the field of dance music to contribute their own remixes. The seventy minutes of this CD are a testament to the width and breadth of a growing and innovative musical area, fueled by a rich cultural heritage, and bubbling with creative innovation. A romantic view of Rajasthan’s splendour takes on new dimensions when explored with the imagination and expertise of these masters in world fusion. Infectious, intricate grooves carry you through the mystique and magnetism of India in her finest guise.

…a steady, throbbing dance beat and an appealing marriage of euphoric, resplendent Rajasthani vocals and techno technique…accessible to anyone who enjoys good dance music. David C. Roper, The New Times

Like compilation albums, remix projects are chancy affairs. Some work beautifully, others are a hodgepodge of cuts that don’t fit together. Luckily, Kali Thunder, which is cuts remixed from James Asher’s Tigers of the Raj record, falls into the former category. To be fair, the Indian theme offers plenty of scope, but the DJs who work it also show plenty of invention, none more so than Solar Quest, whose epic take on “The Astrologer’s Seat” is both ruminative and friendly, exploring the possibilities, both melodic and rhythmic, of the music.

Elsewhere, Swordfish does storming things to “Liquid Sky”, and X-Zecutive transform “Duskfire” into a piece of magic that takes off for the bpm stratosphere partway through. The most interesting cut up has to belong top D.J. Haiko, who perform interesting feats on “Nataraj Express”, with some marvelous scratching. The most popular track is definitely “Temple Gates”, which appears in three different versions, the most interesting from Pearl V. Summit, taken at a stately 74 bpm with the percussion and voice making a dream of music. Is it dance music? At times, yes; at others it’s meditative and exploring. But it’s certainly interesting that the idea of the remix, once the province of the dance floor, has become a part of the vocabulary of every musical genre. Chris Nickson, All Music Guide