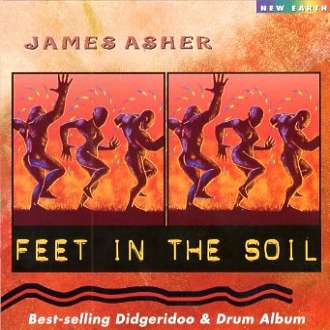 Feet in the Soil

Feet in the Soil is an uplifting celebration of danceable energies centered in the earth. Rhythms of an infectious, hypnotic and tribal quality provide the frameworks for the music, which draws much inspiration from Aboriginal and African lifestyles. James Asher has written and composed many beautiful pieces for Aura-Soma, inspired by his association with Vicky Wall in the early days of Aura-Soma. Although James is well known in the ambient ‘New Age’ music field, he is a drummer! His first instrument is the drum and this collection shows his rich feel and love for the diverse indigenous rhythms of this planet. So, get to it! Kick off your shoes, and get your Feet in the Soil.

“This CD really has a good rhythm that will get anyone stamping their feet. I use this for Dance classes and it gets everyone moving. It has an earthy feel to it; almost tribal“.

Yow! What a fabulous, pulsating, thickly percussive journey this one turned out to be. Drawing his inspiration from African drumming and Australian Aboriginal chants, James Asher has created an enjoyable hybrid. The sizzling rhythms and drumbeats are sure to continue for years to come.Reproduced with permission from the New Earth Records web site.

This CD really has a good rhythm that will get anyone stamping their feet. I use this for Dance classes and it gets everyone moving. It has an earthy feel to it; almost tribal. A music fan from L/O, Zebbug Malta 4/5

Makes you wanna move your feet… Apparently a master percussionist, Mr. Asher uses some more basic (e.g. a variety of drums and percussion) and less heard instruments (e.g. the didgeridoo) to amazing effect. It is driving and moving and exhilarating. I heard this one first in a pair of headphones at a Discovery Channel Store and was captivated and couldn’t help being moved along by the beat.

I suppose it taps into something ‘primal’, kind of like drum circles at concerts and such, when a bunch of folks get together and just start playing away on some drums until a rhythm is created and you start to dance. This album is a lot like that only it is much refined. But it is great, whether to help you on a drive or simply to take you away for a while. As noted on the album, even Pete Townsend of The Who thinks Asher’s music is great. Aorto from Youngstown, Ohio 5/5

Makes you want to “move”…great for housecleaning! The different ‘obscure’ instruments combined with a forceful rhythm have made this one of my favorite CDs for gettin’ me going. The percussion is soulful. Some of it can be a little tedious but the majority is good. This is not necessarily an ‘easy listening’ CD but worth the eccentricity. A music fan 5/5