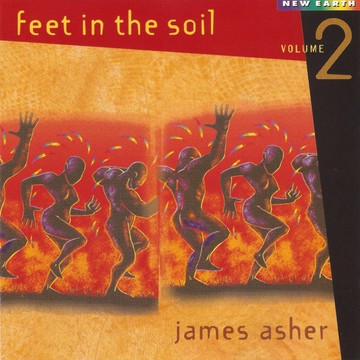 Feet in the Soil 2

Feet in the Soil 2 offers more celebrations of danceable energies centered in the earth. Following on from the best-selling original, larger and deeper drums join the didgeridoo this time around with a fresh palette of sounds setting the party swaying. Drawing further on inspirations from Aboriginal and African lifestyles, the music provides further invitation to join the groove, kick off your shoes and get your feet in the soil!

Customer Review – “Feet In The Soil is my favourite James Asher CD, followed by Tigers of the Raj. Feet in the Soil 2 is another story entirely. The remixes here don’t get too cluttered up with overdubbed “canned” sounds, and instead focus on what made Feet In The Soil so good to begin with – the MUSIC and the drums! The mixing on this CD is done by Grahame Gerard, and he has done a great job. The 64 track mix includes live music with some of the “canned” sounds, but concentrates on showcasing the “real” stuff. The rhythms are pure fun and very danceable. Adding the vocals and dubbing in the additional beats and sounds, such as digeridoo, make for a complete package. The mix is great and moves Feet in the Soil 2 to up into the dance-trance groove category! A real work of art!” Reproduced from the New Earth Records web site

More Reviews of Feet in the Soil 2

James Asher is hitting the skins again! And boy – does he hit them! This album, which is the literal sequel to his break-out smash recording Feet In The Soil, continues in somewhat the same vein, yet also strikes out in some new directions as well. However, suffice it to say that if you’re a fan of the original, you just gotta latch onto this one, too. The CD is an unadorned love song to rhythm and to the drum in its many incantations. It’s also a rock-the-house world fusion release, full of infectious licks, bubbly keyboards, and a sense of joy that will delight even the most curmudgeonly heart (hey, it melted my ice – what else needs to be said?).

His fans already know that James has been bringing together his love of modern dance rhythms and textures with his own brand of masterful world fusion music lately (check out Raising the Rhythms, Colours of Trance and Tigers of the Remix) so the opening salvo of keyboards and urban-beats fused with tribal singing and hand drums will not surprise anyone. The song is called “African Sun,” and it starts the party off jumping (James lists the BPM – beats per minute – of each song in the liner notes; this cut clocks in at a blinding 146!). The song is positively life-affirming as the chants, beats, drums, and keyboards all unite perfectly.

James plays no fewer than eight types of drums and/or percussion, including taiko drums! And, as usual, he has assembled still another talented cast of accompanists, playing still more drums, guitars, wind instruments, and didgeridoo. The only album I have heard with so such dense and great percussion work was Michael Pluznick’s excellent Where The Rain Is Born. But where that album is a little “slick” at times, Feet In The Soil 2 is more concerned with creating a tribal melting pot of primal energy. Not to say that keyboards and synth beats don’t play their part. But whether it’s the presence of a fair amount of vocal chants/singing or the music itself, the songs on the album have a much more “natural” feel to them.

I won’t even try to delineate the various world music influences. Sometimes I think James is on a personal quest to write a song that uses the entire United Nations roster of countries’ music all at once! And who knows? Maybe he’ll do it someday. For now, I’ll gladly take cuts like the deep-drumming tribal “Janjara,” the hybrid polyrhythms and didge-infused “Standing Ngomo”, the bluesy and sultry “Camel Train”, the kinetic “Bedouin Wedding” (a groove-laced mixture of dance-floor cool and desert mystery), and the techno-meets-Far East “Send In The Scribes” (probably my favorite cut on this delicious album). Feet In The Soil 2 closes with a startlingly alloy formed by blending trip-hop scratching, dance beats, Motown horn licks, and world chanting and percussion on the nine-minute “Tammy Tama”. Incredible doesn’t come close to describing the overpowering sense of celebration and joy the music fills the room with during those nine minutes!

You simply have to hand it to James Asher. Not only is he a helluva drummer and keyboard player (and composer), but he’s made it his mission to break down just about every nationalistic boundary on the musical frontier that currently exists. I don’t know of anyone who does more to show that music is truly a universal language and that no one, no matter what color their skin, what dialect they speak, or where they hail from, is immune to getting up, moving their feet and shakin’ their ass when the drums start pounding. If only we could turn the whole screwed-up planet over to him, maybe we would dance and party our way to world peace. Hey, it could work. Bill Binkelman, a.k.a. the Man who would be King. Reproduced with permission from the Wind & Wire web site.

The body of work James Asher has been developing over the years has been very well received by listeners. Earlier albums like Globalarium, Raising the Rhythms, Tigers of the Raj and Feet In The Soil showed his ability to work in catchy melodies with extended percussive dance grooves. He has always used a combination of synthesizers, drum machined, guitars, bass and sax blended artfully with folk instruments like wood flutes, digeridoo, shakers and hand drums. His compositions get under your skin and inspire the urge to dance and get caught up in the flow of the sound until sometime later when you notice that the trance has drifted off at the end of the music. Feet in the Soil 2 picks up where it’s predecessor left off, Kicking into gear with African tribal rhythms, Japanese taiko drums, wordless vocals and chants to heat up the grooves on “African Sun” and “Janjara”. There are also mellow moments in the dreamy slow passages like “Atlantean Chant” or “Royal Blue”. And the spirit is always lurking somewhere in the mix, so take a cue and enjoy the party when “Crocodile Feet” inspires you to get a move on. DL, New Age Voice Magazine. Reproduced from the New Earth Records web site.

THANKS TO:- Bhikkhu and Waduda at New Earth for their ongoing creative support, kindness and understanding. All at Aura-Soma, especially Mike Booth for the ongoing inspiration. Special thanks to all the excellent musicians who took part – your performances are the key. Grahame Gerrard, whose mixing wizardy is surpassed only by his wicked sense of humour. Soundscape for making the excellent Red recorders, whose reliability, flexibility and supreme audio quality make recording and sound manipulation a real joy. Arthur Hull for the inspiration of your vision. Remo drums for making great drums – light, tough, brilliant sounding and comfortable to play. Roland for their extraordinary and innovative musical equipment, enabling extraordinary creativity. Celia, my wife, for sustaining us all with great nourishment, and tolerating some long and very loud sessions!