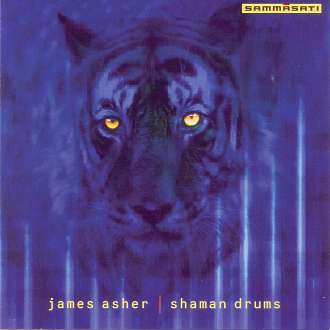 Customer Review – “A greatest hits collection from earthly instrumentalist James Asher. Percussion-driven tribal works are Asher’s bag and this multicultural collection shows the artist at his best. Twelve adrenaline-pumping slices of Shamanic bliss await listeners, each a lively swirl of beats and textures from a verity of cultures, including Africa, India, and Native America. One of the album’s principal highlights is the previously unreleased opening track ‘Amma’, an ethno-electric kaleidoscope of groove that features Indian master drummer Sivamani. Other strong points include the didgeridoo-flavored ‘Red Rhythm Dragon’ and the enchanting Asian ‘Temple Gates’.”

Ecstatic trance dance music of the highest caliber is offered in the powerful new release by percussionist-extraordinaire, James Asher. Making use of a wide range of percussive instruments, didgeridoo, keyboards, tribal chant and god knows what, James creates a cacophony of sounds and rhythms that are deeply moving and quite infectious. As the movement begins and the rhythms build, a primal connection with the earth broadens and intensifies, taking the listener deep into the mystical, musical core of Gaia herself. In the midst of this focused abandon, ecstasy begins to filter up through the feet, then the legs, the spine, arms, torso, neck and by the time it reaches the eyes there is nothing else in the awareness except the indescribable rapture of total, earthly bliss. Better yet, this vehicle of bliss is completely legal, non-addictive and it’s frequent use has been proven to cause weight loss! All right, I made up that part about weight loss because I got a little carried away by the music – but that’s a good thing! Musical Soundscapes, Aug 2002

Sammasati is the new boutique line from New Earth Records, and one of their first releases is this compilation album from the best-selling artist James Asher. This anthology showcases Asher’s energetic work, featuring drumming and other high energy tracks from his previous New Earth releases, including five tracks from the classic drum-and didgeridoo album Feet in the Soil. But what makes this anthology really worth picking up is the opening track, a collaboration between Asher and Sivamani, a master drummer from India. Their musical cross-breeding resulted in a joyful explosion of rhythm that could have been lifted off of one of Mickey Heart’s better albums. CM, New Age Voice July 2002

Forsaking his pop and rock pedigree and chops, the great Asher has made a career exploring drums that is at least or more interesting than Mickey Hart’s, it just doesn’t come with the Dead high sign attached. This retrospective, with a look forward, recaps a dandy decade of Asher at his best, bring world beat home for everyone. A great tour de force. Chris Spector, Midwest Record Recap

Trance drum music that few pure electronica artists can ever come close to. ‘Amma’ features Indian drummer, Sivamani and ‘Send In The Drums’ is a burning drum and didgeridoo set. Those two tunes are worth the price of a new CD by themselves but must of the other tunes a hot dance tunes as well. If you like Mickey Hart, you’ll like this. DJ Mike