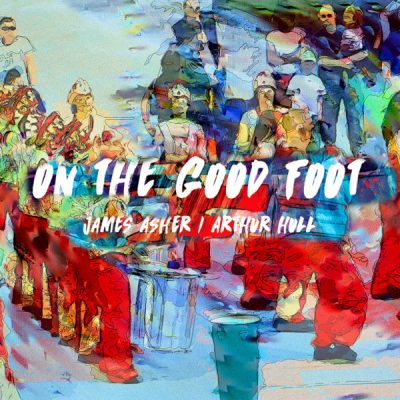 On the Good Foot

On the Good Foot Background

Arthur Hull`s visit in October propelled the music on this album into being. 2018 was a strange year which seemed to contain many extremes of all kinds. The weather was intense in many forms, many people experienced profound personal change, and the politics increasingly felt like a surreal pantomime whose performers are apparently oblivious to its potentially disastrous consequences.

Where have those elements gone that used to put a twinkle in our eye? I reflected nostalgically about former good times, and found myself longing for the sense of fun which I have previously enjoyed so much. Many things nowadays revolve around how they can be organised on computer.

In the case of music this leads to a great deal of categorising and tagging. But this approach is not really sympathetic or akin to the way in which composers think. Part of what makes artistic expression great is its ability to blend subtly aspects of varied and diverse styles without any artificial constraints or barriers. Especially as we seek to form a coherent expression in response to our increasingly crazy world, or should I say despite it?

As humans we are fragile analogue beings. We face an increasingly digital environment on all fronts.The world of social media, how we gain information and how we shop – all fiercely remotely controlled, and manipulating us in ways we can only guess at. Part of the wonderful help I have had in creating music that seeks to transcend all this is from the gifted musicians taking part.

Arthur brings his playfulness, imagination, percussive wizardry and creative critiques that light the way forward. As on my previous release Return of the Tiger I called on the phenomenal didgeridoo playing of Jason Salmon, who seemed remarkable attuned to the music, despite never having heard it previously. Bruce Knapp`s highly skilled guitar playing helped me break into several musical zones which were fresh to me.

I had worked with keyboardist Tom Phelan before on a performance at an Indian wedding. But he surpassed himself when recording for this project. So much joy, dexterity and fluidity combined with a remarkable musicality. Greg Heath`s sax provides a superbly sassy, gutsy and agile counterpoint to the proceedings. Discovering the masterfully funky style of bassist

And finally as a fantastic surprise as the project neared completion Ziza`Stupkova`s fabulous voice made a stunning addition to the Island Farewell track, along with the lyrics she wrote that match the track so well.

Thank you to all the musicians – you made this music possible.

Ever since my first album The Great Wheel I have enjoyed music in both energetic and more chilled styles. This release of 2 EP`s celebrates this further with an appreciation of the concept of wellbeing in two clearly defined zones. I hope listeners will grasp and enjoy both.

On the Good Foot Review by Joanthan Widran

On the Good Foot, an extraordinary, rhythmically eclectic and sonically expansive two EP set by longtime collaborators and drum circle pals James Asher and Arthur Hull, artfully celebrates the deeper complexities of “Energy” and “Chill” with an otherworldly swirl of all the musical vibes that the UK based Asher – a composer and multi-instrumentalist whose arsenal includes keyboards, percussion and drums – has spent his lengthy career exploring. Driven alternately by dense percussion and free-floating atmospheres, he and famed drummer/percussionist Hull share their passion for soul, funk, jazz, ambient and mystical new age and world music.

Considering that the new dual collection marks the 30th anniversary of Asher’s breakthrough album The Great Wheel, the 11 collective tracks of On the Good Foot create the perfect open door for those unfamiliar with Asher’s multi-faceted discography to get started. One of the benefits of the digital age is the opportunity to experience an artist’s entire catalog at once, and Asher’s offers a multitude. The main themes he’s delved into on various projects include Meditations in Colour, World Music, African and Aboriginal music, Indian music (especially his landmark 1998 work Tigers of the Raj) and trance music. His earlier professional experience will intrigue classic rock fans, too. He played drums on Pete Townshend’s 1980 solo album Empty Glass, and The Who guitarist produced an early single for Asher. Asher’s fascination with drumcircles led him to cross paths and start working with Hull, one of the genre’s most popular and charismatic artists.

Hull has been Asher’s most longstanding collaborator since 2003, and On the Good Foot represents their 11th joint release.
There’s a reason behind the playful mention of “fun” that Hull receives in the project’s credits after “drums, percussion, drawings, vision.” It was Hull’s visit to Asher’s home last October that propelled the recording. The two thought about the extremes cluttering and darkening our days in 2018, from intense weather to political divisiveness – and decided to create a unique collection in response to Asher’s question “Where have those elements gone that used to put a twinkle in our eye?” Their longing for a sense of fun – and Hull’s ability to bring that to the party – is truly the foundation of this multi-faceted journey. Asher mentions in a blurb about On the Good Foot that the music is a coherent expression “in response to our increasingly crazy world – or should I say despite it?”

Make no mistake, however, “Chill” doesn’t mean sleepy, just meditative and relaxing. Symphonic pieces like the harp and vocal choir laced “Camera Obscura, and ethereal “Far and Wide” (which pulls the soul along via angelic wordless vocalizing) are immersive and profoundly thought provoking. Sort of like spa music with colorful twists and turns, these tracks, as well as the breathy and mystical “Supermoon,” and “Sublte Light Navigation” – the hypnotic ten minute closer featuring chimes and otherworldly synth-generated vocal accents – have a soothing, therapeutic quality that makes them an ideal sonic tool for holistic wellness (if one so chooses). They will help soothe the worries of the day while provoking breakthroughs in creative thinking.

The tone and intention of the “Energy” EP are a complete 180 from the “Chill,” offering an explosion of jazzy, funky jamming and an intensely percussive global consciousness to combat the world’s frequent chaotic darkness and despair. It kicks off with “Jungle Party,” a wild, visceral fusion of spirited synth, jungly nature soundscapes and tribal, trance-dance grooves designed to create hypnosis amidst tons of pleasurable physical movement. Pure jangle and frolic throughout, the infectious title track “On the Good Foot” keeps the body movement flowing with lively piano and electric guitar driven jazz fusion.