Rod Pooley and I have now been collaborating on a number of musical projects, and this is getting better as it progresses. The direction we were exploring on Monday was that of comedy for soundtrack purposes. Rod is able to combine a sharp and witty sense of humour with phenomenal keyboard agility and dexterity. The end result is nothing sort of amazing. I suggested the first musical idea which was called `Suss Kebab`. I explained that what I had in mind was a chordal accompaniment on harmonium, with a melody shared by zurna and duduk wind instruments to convey the image of a less than wholesome kebab outfit. `No problem` said Rod and he came up with some awesome and funny interpretations, and the parts where he played deliberately out of tune, by dint of the modwheel on the keyboard, had us cracking up. Awesome! 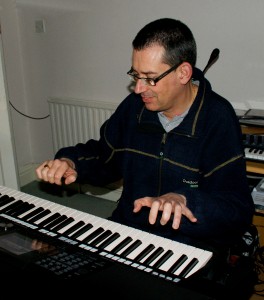