India has cropped up through my life many times, with sufficient strength to leave me in no doubt as to the strength of that connection. After my initial visit to Rajasthan in 1997 the seeds of fascination for me were sown, and Tigers of the Raj was born. Then having the good fortune to meet Sivamani at a later point the journey extended and diversified into other strands and the Drums on Fire album. Then with my more recent work with Mahesh Vinayakram, that interest continues to thrive – and our album Bravado Masala. Each of these three albums have been released in India, and with that to whatever extent an audience of listeners who enjoy these adventurous leaps into the area of fusion.

One of these pockets of interest culminated in receiving an invitation to play for a wedding in Delhi in December of 2008, and as it happened a large and prestigious affair, allowing a special chance to bring the recorded music of the albums to life. 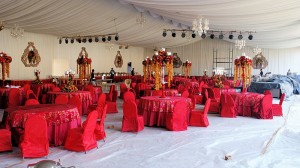 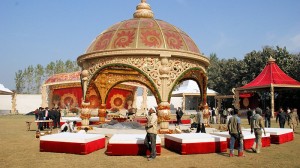 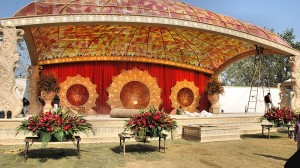 It was an exciting challenge to bring together the musicians from the UK and India that made up the band. From MoonDance, the ceilidh band with whom I play in the UK were Tom Fairbairn on violin/keyboards,Brian Heywood on guitar and Paul Francis on bass. I played drums, and provided backing track CD elements from my past work so as to enrich the mix.

Joining us from India when we arrived were Mahesh Vinayakram – the extraordinary and exuberant singer,Navin Chandar on flutes (wow!) and Prasad Karembelkar on tablas. 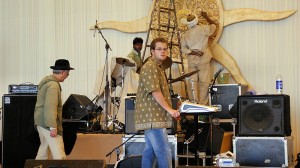 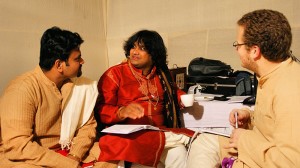 We played tracks from Tigers of the Raj, Drums on Fire and Bravado Masala. We also played some more Celtic flavoured numbers from the MoonDance repertoire, which seemed to be further enhanced by the additional spice of Indian influence. 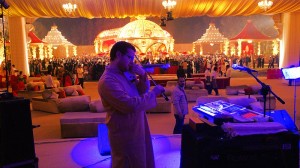 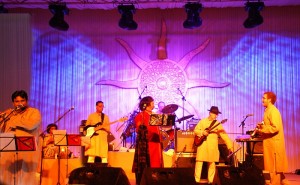 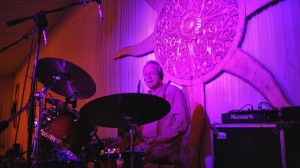 Indian weddings are amazing affairs, and particularly when they are executed to this set of standards -sophisticated, artistic and stylish. It was a very colourful, lavish and superbly designed wedding, and masterfully organised by the Indian special events company efactor4u.

Mahesh and I had worked together several times before, especially during the recording of our joint album Bravado Masala but the other guys had never met each other, so it was a jubilant confirmation that music is a universal language when we saw how well the band gelled, and from the word go a high degree of cohesion and fun unfolded.

We were further lucky to have a really excellent sound engineer balance us all up – Sameer, and it is thanks to him that the audio quality in these excerpts sounds so good.

Live performance work is an area that has increasingly been part of my activities. This event was something of an eye-opener in just how fast excellent results can come about when you have a suitable team of musicians, and if anything reinforces my determination to seek out other such opportunities.

When a project like this carries with it the enthusiasm of all involved, there a resulting collective strength, that rises above what any of us might achieve individually. All of us felt this, and are consequently excited about working together again as this line-up.

Audio excepts from the live show