It was great to have a chance to meet up with old friend and creative collaborator Sivamani recently in London. As he was performing during the Alchemy Festival, he was in the UK briefly. Sandeep Raval was also there and it was brilliant for the three of us to be reunited. The enclosed photo captures the moment. Sivamani has a huge profile in India, being an extraordinary and highly charismatic showman. He also has a significant worldwide following. We recorded an album together in 2001 called Drums on Fire. During the last Commonwealth Games there I heard one of the tracks – Hangfire – being played in the stadium as a preamble to the sporting events. 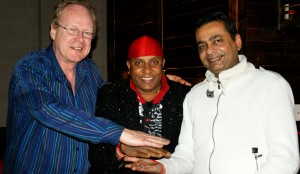